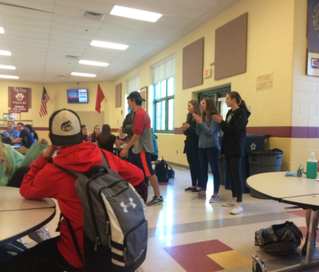 Bon appetit! On Friday, October 7, the French Club hosted their Exchange Breakfast. This annual event invites BHS’s year-long exchange students and their advisories to a fun get-together for a buffet-style breakfast! With around one-hundred students in attendance, the French Club had their hands full!

This tradition of welcoming the exchange students has been around almost as long as the school has. Just a few years after BHS opened, Madame Noble had the idea to host a “send-off” social to say goodbye to the French exchange students who were soon to depart for home. This event was such a success that Madame and the French Club wanted to create a new tradition to welcome the students. Ever since then, the Exchange Breakfast has been an amazing experience that has grown from a small gathering to a massive celebration!

This year, there were four advisories in attendance, along with all of the French Club and a couple of Spanish Club helpers. Madame Noble felt that the breakfast went “really well thanks to the French and Spanish Club students who helped us out, and to the PTG, who are so dependable.” The event is a huge “team effort,” according to Madame, with food brought in by students along with donations from the PTG. There was a large array of food and drinks, buffet-style, which included crêpes, desserts, hot chocolate, and more!
​
But of course, the real critics to impress were the exchange students themselves! This year, BHS is hosting three year-long exchange students. Madame was not worried, though, as she has been hosting this event for a while now, saying “at first they aren’t sure and a little nervous, but once they are there, they feel welcome and enjoy the breakfast and also being special for the morning.” And Madame was right, the foreigners ended up loving the event! But it was not just the exchange students who had a great time, the advisees of each exchange student along with Madame’s were welcomed to the breakfast. “They love it, they don’t know [about the event] until they have exchange students in advisory, and they get food!”

Overall, French Club’s Annual Exchange Breakfast was a huge success. This integration of the new students into Bedford’s culture is always a great opportunity for everyone involved. Madame Noble is excited for the years to come, as this grows each year as BHS hosts more and more students. As students are beginning to get back into their academic mindsets, this event is a positive  way to bring together our diverse community for a morning of friends, fun, and food!