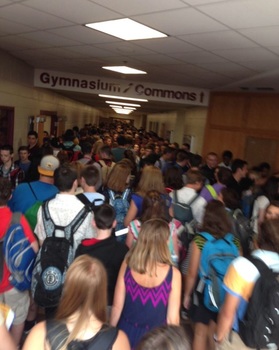 Quizzes, tests, essays, reading packets, powerpoints; these are the harsh realities that accompany getting a high school degree. Although they may be a pain, they are inevitable. However, there is one thing everyone experiences in high school that is guaranteed to get a collective groan- bad hallway etiquette. So, what is it about poor hallway etiquette that gets your goat? And if everyone finds it aggravating, why are there still people that do it?
Students have five minutes to get from point A to point B. There is no time to be stuck on the stairs because some of your peers need to have a “quick” chat while they’re passing by one another.  On several occasions there have been large circles of people, their circumference touching both walls. The student is left with one option, walk straight through their circle. It’s awkward enough squeezing through their seemingly impenetrable wall, but then the student is left walking through a circle of people with all eyes on them. Have they just walked into a rap battle? A dance off? A game of spin the bottle in which they are the bottle?       There are several other arguments as to why the hallway is not the best meeting area, but let me argue the other side. We have all done it, one way or another. Holding up traffic is almost as inevitable as a pop quiz in math class. All biases aside, think about  it objectively. Imagine being so excited to see a classmate that you have to ask them how their day is going because this may be the only time you see them all week. Imagine someone telling you that you have a surprise quiz next block giving you time to prepare. Imagine actually hosting a rap battle in the hallway, how cool would that be? When you think about it, does it really hurt to wait behind someone in the hallway while they are making unforgettable bonds with their peers? Next time you encounter a roadblock take a moment to take a deep breath and destress, take a look at the posters on the walls, compliment the person next to you, and remember that someone blocking the hallway is not the end of the world. Also, feel free to make a mental note to never be that person who won’t get out of the way, seriously we have places to be.