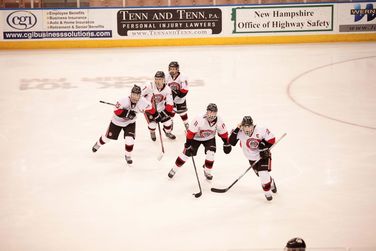 Congratulations to this year's Bedford Bulldogs hockey team lead by head coach Marty Myers on bringing home another state title. Division-I Champions for the second year in a row, this time beating out Concord in a 7-0 shutout. It was never a question that the Bulldogs would win this one after they came out of a three-goal first-period guns-a-blazing shooting their way to a 6-0 lead in the second period.

The Bedford student section was relentless towards the opposing fans and thus began after Jay Roberto scored his second and the team’s third goal in the first period. Jay finished the night with a hat trick, while Griffin Gagne had two goals, and Jake Rio and Colin Voloshin each added one of their one. Bedford was clearly the better red, white and black team, but why so quiet Concord?

Concord had plenty of opportunities to score, leading Bedford in nearly double the shots on goal. However, Bedford junior goalie Erik Voloshin had nearly everything going for him on defense and in the net. As for Concord, the Bedford student section came prepared with chants that shall not be repeated on BHS Unleashed. Such roasts included, “Where’s your goalie?”, and then followed by, “Change the goalie”.

At the end of the second period, a few Concord fans attempt to fire up their home crowd by coming over to the Bedford student section and trying to steal our mojo. Too little too late for the Concord fans as the scoreboard proved there was a deficit too big to overcome.
​
Tally the dubs for the Bedford student section and the beloved blonde bulldogs. There could not have been a better ending for the graduating Class of 2017. Students can look forwards to awards night when the hockey team will be presenting Athletic Director Bill Whitmore with the 2017 Division-I State Championship plaque, good job bulldogs! 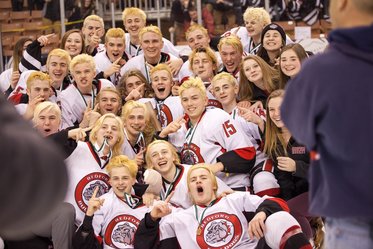