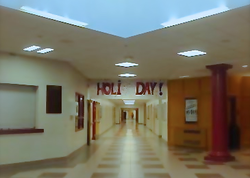 Given the fact that Holi, the Festival of Colors, is full of color wars and dancing and general excitement for the coming of spring, it is no wonder why the holiday is a big hit in Hindu customs. Yet the holiday doesn’t just consist of partying; it’s also a time for forgiving, forgetting, and loving oneself and others.
The Hindu holiday, commemorating Radha’s love for the god Krishna despite the blue coloring of his face, is extremely important to Hindus all around the world. But this year, at Bedford High School, Mr. Pepper’s World Religions class decided to bring Holi to the high school by showing a video about the meaning of Holi and asking students and teachers to write kind messages to their friends on brightly colored index cards. The sea of color decorating the wall of Mr. Jozokas’s office is evidence for the success of Mr. Pepper’s mission.

Yet the celebration of such a holiday at Bedford High School raises the question of why we are celebrating Holi in this way and if it does not do justice to the meaning of Holi; after all, we weren’t able to have a massive color war or dance in the streets. Student Brian Mailhot commented on this, writing that while he “welcomes the opportunity to learn about different religious and cultural traditions” and understands differing beliefs, he felt as if his “participation in the celebration would be disrespectful to the Hindu faith” given that we only celebrated one part of the holiday without delving too much into the “broader religious meaning and significance behind it.”
This notion calls into question secular celebration of any holiday. For example, we write Christmas cards to soldiers in war without fully considering the religious implications of the action.
With that said, it’s better to give people a taste of a new religion, a new culture, rather than doing nothing. People at BHS seemed to really enjoy learning about Holi, and the World Religions class had a blast throwing paint onto a poster and organizing the celebration.

By taking this step towards religious awareness, BHS showed itself to be a school committed to both learning and fun! Our celebration of Holi was a small step in the right direction, and BHS will hopefully have more events like this in the future.