Despite the lack of snow in New England over the past couple of years, two snow sports are on the rise at Bedford High School. Some might say that there is competition between the two, whether alpine or nordic is the more superior snow sport. However, these two sports are not so different from one another. The alpine team is coached by library assistant Josee Eaton and special education teacher Joe Pratte. As for the nordic team, they are coached by Anders Vikstrom and IB coordinator Jon Cannon.

I spoke with nordic skier Christian Dyrvik and alpine skier Ellen Harnsberger, and while they might disagree on which form of skiing is better, it is known that both sports require intense concentration and skill. Nordic skiing follows a longer course that is typically five kilometers in length. Practices are held at Legacy Park next to Riddle Brook School. The main training focuses for these students are strength and endurance, to help them cover longer stretches of land; ranging from grueling uphills, steep downhills and sharp corners.

“Going down a hill, probably between 25 to 30 mph maybe, at the most 32 mph.”, Christian adds, “As for average speed, in the range of 12 to 18 mph. I know for me personally, my freshman year on the team I was absolutely no care in the world before I got pretty badly hurt during the first race. It's all about trying to find a balance because you restrain in your mind that whether consciously or unconsciously you are gonna want to go slower. In the middle of a race, you are gonna want to make up as much time as possible.”

Distance running is key in increasing performance on long courses, however being able to do well and improve technique is another part to training. Spenst, meaning explosiveness or “boing” in norwegian, is a training technique aimed towards improving speed and power. Workouts include one or two legged hopping, occasionally uphills.

Alpine skiing, on the other hand, is technical focussing on speed and timing, getting to the bottom as fast as possible. Training is focused on gates and drills to help with speed and performance. The alpine team trains at Pats Peak in Henniker on Mondays and Wednesdays, with competition typically on Thursday afternoons.

Ellen says, ¨I personally have not had any injuries with ski racing, but my brother ski raced and he broke both his tibia and his fibula. Some common injuries that I know of are ACL tears and knee problems in general.”

The average alpine skiers can reach up to 50 mph in speeds much faster than nordic.

Nordic speeds may not be even close to alpine, but it's appropriate to be cautious in both sports. Congrats to both teams on successful seasons, but especially to the boys alpine team on bringing home the championship. Way to go bulldogs! 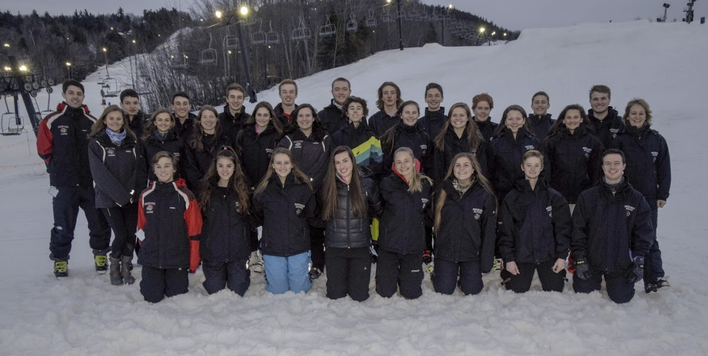 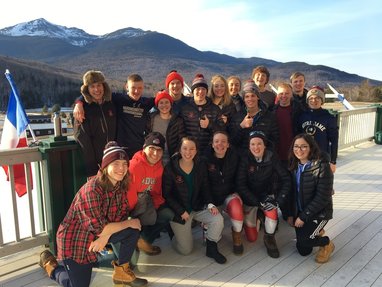 photo credits: Josee Eaton (alpine/top) & Molly Quinn (nordic/bottom)
At the end of the nordic season, the boys team led by Michael Giraldi finished second behind Concord and the girls team led by Abi Vickstöm placed third behind Concord and Bishop Guertin at states. Both of the top nordic skiers qualified for Easterns, as well as seven others at Meet of Champions.

The boys alpine team had an even better finish to the season by winning the Division-I State Championship, while the girls team was a close second place to Pinkerton Academy. While the nordic season was good, the alpine season was great. To put their season into perspective, nine members of the alpine team qualified for Meet of Champions and three members qualified for Easterns; on the boys team, Joey Pollock and Bryce Laurendeau were top qualifiers, and on the girls team, Sophia Dobrowski also qualified.
​
(MOC Girls Qualifiers /alpine: Sophia Dobrowski**, Tori Pratt**, Anna Pollak*, Sydney Berube*)
(MOC Boys Qualifiers /alpine: Jack Berge**, Michael Akstin**, Joey Pollock*, Zachary Kearns*, Bryce Laurendeau*)