The Smallest MVP in Crew 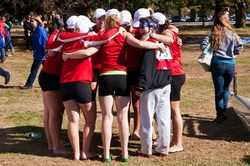 How is that even spelled?

Is that the guy that yells "row"?

These are questions that are commonly asked when discussing one of the most vital members of a crew team.

So now let’s answer the first question, a coxswain(yes that is how it’s spelled) is the athlete who sits at the front of the boat and steers their team to victory.

But that's only scratching the surface of all that a coxswain does.

As Girl’s Crew Captain Emma Ashooh put, the coxswain is the “quarterback” of the boat. A good coxswain is needed to lead the team to victory.  And while coxswains are normally the smaller members of the team, they need the biggest characteristics.

“Coxswains are not easily replaceable” says Ashooh “they have to earn their spot, learn what rowers like to hear, how they like to race, how the boat steers, the different strengths of rowers, the list goes on”.

But perhaps the biggest thing that coxswains have to do is to learn how to lead.

Junior Coxswain Jake Gomes says that its tough to lead when all people see is “some short skinny kid sitting in the back of the boat” adding that along with taking on the role of being a coxswain, you must act like a coach and “make sure everyone is giving it their all”.

This all while giving it their all too. Even though they may be smaller and not quite as strong as their fellow rowers, their commitment and heart is equally as powerful.

“We have to make sure that the team knows that we are doing our best to give them an easy race but also giving them everything we have physically” says Gomes.

But once again who wants the short skinny kid to be their coach?

Its the coxswain who makes sure all those hours that everyone tirelessly puts in every week do not go to waste and to bring the glory that all the rowers deserve.

So the next time someone tells you that a coxswain doesn’t do anything, ask them how a soccer team wins without a goalie, a basketball team without their knowledgeable head coach, and how a house can hold together without the cement that keeps it together. This is what a coxswain is to the sport of crew. Its a hard job, but someone has to do it.