The Supreme Court is "On The Road" 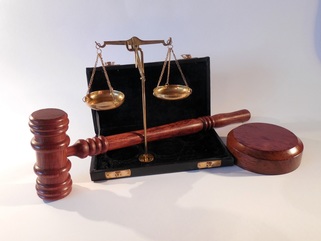 Wednesday the fourteenth of October, BHS received a special guest: the New Hampshire Supreme Court. Most of the school showed up to hear from these experienced justices, and ask questions about the NH legal system. Bedford students were able to listen to two high-level cases during the three hour hearing. Each lawyer stated their arguments and answered questions from the judges about their respective cases for fifteen minutes.

The first case, State v. Boutin, pertained to a man who was arrested for possession of marijuana. His defender argued that because the actual marijuana was not shown as evidence in court, the testimony of the lab analyst and pictures of it was not sufficient evidence. The state claimed that it is not necessary, even if it is the precedent, to show the actual drugs at a trial, so it was their right not to.

The second case, State v. King, featured a woman who was arrested for suspected theft of money from a childcare center where she worked. She claimed that she gave all the checks to her boss, but her boss said that the childcare received significantly more money when Ms. King quit. The jury was instructed to choose which person’s testimony, Ms. King’s or her boss’, to believe. Ms. King’s defender argued that because Ms. King’s boss’ evidence was circumstantial (she did not know for a fact that Ms. King had not given her the money, it just seemed like she committed the crime), the jury must decide the judgement based on the direct evidence, Ms. King’s claim that she gave her boss the checks.

This visit was a part of the “On the Road” series that the NH supreme court does every year to educate children on the state’s highest court. Bedford is the seventeenth school to host it. This program is the only time when the court convenes someplace other than the Supreme Court building in Concord. It was a great honor for Bedford to host this elite event and even if some students did not find it appealing to their interests, they have to admit it was a unique experience.