The new tale as old as time 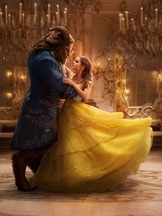 As I walked into the theater, my anticipation for the new “Beauty and the Beast” reached higher and higher until the iconic jingle of “Cinemagic” sounded in my ears. The reminders of movie theater etiquette were projected on the screen and then the familiar Disney display was finally shown and zoomed out to the infamous rose. As the prince’s curse was explained, the camera then shot to Belle’s provincial town and the going-ons there, which introduced the conflicts of Belle’s strangeness and Gaston’s vulgarity, much like the cartoon. As the scenes of the songs were shown, the diversity displayed was much appreciated by yours truly, and added a truly modern twist on the beloved tale.

Another benefit of this newer version was that more character was added to Belle when she utilized a faster hands-off method of laundry, demonstrating her intelligence, which is not always appreciated in Disney princesses. “It was magical and it followed the plot of the original pretty well, the scenery was amazing and Emma Watson [who plays Belle] was perfect”, said Sophomore Stephanie Rioux. As Belle’s father’s role in the story came into play, the heartbreak of a father-daughter relationship was epitomized but was relieved with the castle’s antics.

As this was the live-action version of the classic, it did differ from its animated counterpart, mostly in filling in plot holes, such as the unexplained absence of Belle’s mother and why the prince was so particularly nasty. While Gaston’s character was initially humorous in his blatant vanity he quickly turned dark as Belle and the Beast’s relationship blossomed in the castle. Then, the picturesque ball scene that was taunting us for months in trailers at long last appeared, along with the magnificent set and the intricate designs of Lumière, Cogsworth, and the Beast himself. But, as we all know, the scene ends somberly with Belle leaving, leading up to the climactic battle at the castle, which was much more distressing than the original. But Disney did not fail us, and the audience heartily received the promise of a happily ever after, concluding the success of the long-awaited remake, as it stayed true to the original, but added some modern values.